March 07, 2007
Yes, there is a waterfall at Wentworth Falls – white water splashing over an impressive drop into a deep ravine (today’s photo shows only half of its height). A good view of the falls can be seen from Princes Rock Lookout but I’ve been unable to get a picture because the morning sun glares too brightly at the head of the falls. So, later in the day when the sun had shifted elsewhere, I persuaded my husband to join me on the walk down to the rock, which is a short 20 minute stroll from the car park. 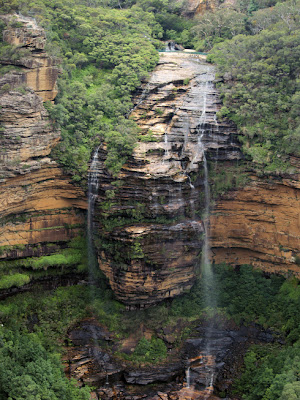 The downhill walk was easy. On the way up I aimed to show off my new found fitness and in no time I was puffing and complaining and begging him to go slower. Earlier in the week, as part of a much longer trek, I covered that track without as much as a whimper. It’s back to solitary walking for me.

Words to Walk With:
From The Rock-Lily’s Pale Spay by Roland Robinson
“The rocks crouch on their knees
in earth, torsos of trees
and limb-boughs lead up where
the cliff face scales the air.”