March 09, 2007
I have been paying attention to bird melodies. Many birds I don’t see, but I do hear their song. Those that aren’t big or colourful I name “little brown bird” and I’d like to do better.

I’m thinking that if I knew which song belonged to which bird I might be able to see and identify them more readily. But even when I have worked really hard at remembering the tune like I did on the grey day I haven’t been able to match them with the sound recordings.

Worse still, when I look up the bird book and read the phonetic descriptions for bird calls I know well, I wonder if we have been listening to the same creatures! This is clearly a difficult area. The Birdsong Central website has some tips to get me started. I might give it a go. 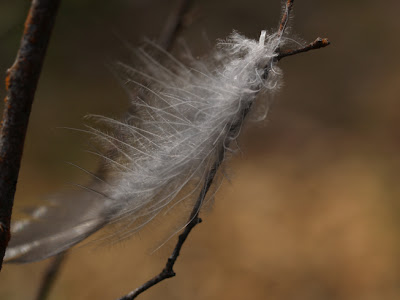 Feather in the wind, Katoomba

Words to Walk With:
Never Again Would Bird’s Song Be The Same by the American poet Robert Frost

“He would declare and could himself believe
That the birds there in all the garden round
From having heard the daylong voice of Eve
Had added to their own an oversound,
Her tone of meaning but without the words.
Admittedly an eloquence so soft
Could only have had an influence on birds
When call or laughter carried it aloft.
Be that as may be, she was in their song.
Moreover her voice upon their voices crossed
Had now persisted in the woods so long
That probably it never would be lost.
Never again would birds' song be the same.
And to do that to birds was why she came.”