March 04, 2007
I have been walking the tracks around Wentworth Falls and over the next few days will cover some of the things I have found. Walks in this area include the Undercliff Track, Overcliff track, Short Cut track, National Pass, Valley of Waters and the Nature Track. The views from the lookouts are spectacular but some of the paths are worse for wear in this highly trafficked area. Even so, I generally find the rougher tracks take less effort than the well ordered steps which always seem just the wrong width for easy walking. 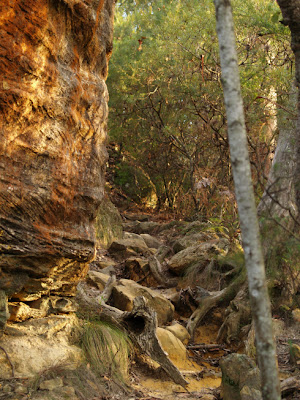 Some parts must be very difficult to maintain because constant dripping from the hanging swamps above make the path boggy even in dry weather. I am always grateful for my sturdy pair of waterproofed leather hiking boots.


Words to Walk With:
To A Pair of Blucher Boots written in 1890 by Henry Lawson who is one the best-known Australian poets and fiction writers of the colonial period

"Old acquaintance unforgotten,
Though you may be “ugly brutes” –
Though your leather’s cracked and rotten,
Worn-out pair of Blucher boots.

‘Tis the richer man before you,
Dearer leathers grace his feet;
‘Twas the better man that wore you
In the tramps through dust and heat!
...

Tell me, if you know it, whether,
As I sadly tramped away,
Bore I heavy on your leather,
Worn-out pair of Bluchers, say?

Though your leather’s cracked and rotten,
Though you may be ugly brutes,
I’ll preserve you unforgotten,
Worn out pair of Blucher boots."