March 29, 2007
Recently I have enjoyed Darwin's Walk and will write some of my observations over the next few days. This track is so named because it follows the path Charles Darwin took from Weatherboard Inn to the cliff edge in January 1836. This was 23 years before he published "The Origin of Species" which made him a famous and controversial figure. His visit over the mountains was on his way to Bathurst and was towards the end of his 5 year voyage on HMS Beagle.

He wrote in his book The Voyage of the Beagle "In the middle of the day we baited our horses at a little inn, called the Weatherboard. The country here is elevated 2800 feet above the sea. About a mile and a half from this place there is a view exceedingly well worth visiting. Following down a little valley and its tiny rill of water, an immense gulf unexpectedly opens through the trees which border the pathway, at the depth of perhaps 1500 feet. "

Today Darwin's Walk is an easy 3km (one way) walk on a well maintained track and boardwalks beside Jamison Creek. The music of the stream as it flows over rocks, small cascades and sandy pools is a cheerful accompanyment for a pleasant stroll. 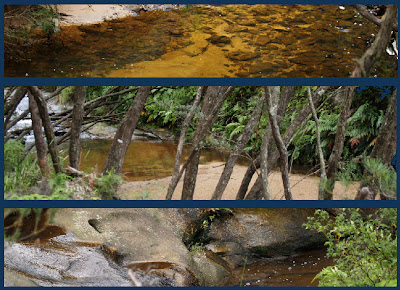 The water in Jamison Creek eventually flows through to Lake Burragorang which supplies water for Sydney. (Shown in my post of 13 March 2007)
Words to walk with:From The Brook by Alfred, Lord Tennyson
"I chatter over stony ways,
In little sharps and trebles,
I bubble into eddying bays,
I babble on the pebbles.

With many a curve my banks I fret
by many a field and fallow,
And many a fairy foreland set
With willow-weed and mallow.

I chatter, chatter, as I flow
To join the brimming river,
For men may comeand men may go,
But I go on forever. "