March 08, 2007
On a clear morning at Wentworth Falls the sun glistens on the western cliffs and mist flows like a gentle white river in the valley. 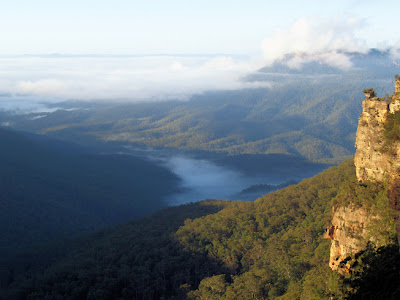 In 1836 as a young man, Charles Darwin who later became famous for his theory of evolution, visited the Blue Mountains and walked from Wentworth Falls Township (then known as Weatherboard) through to the cliff edge. There is a track known as Darwin’s Walk that follows his footsteps. I will do it one day.


Words to Walk With:
From Charles Darwin’s journal of 1836 published as the Voyage of the Beagle.
“An immense gulf unexpectedly opens through the trees … This kind of view was to me quite novel and extremely magnificent.”