November 30, 2007
"Similar difference" was the term one of humourists coined to described Australia's recent election campaign. It was rather hard to spot the difference between the parties.

I had a "similar difference" problem with this tea tree that was also flowering on the walk out to Echo Bluff, compared to the one I showed in my last post. Just like our political parties, they are actually different. 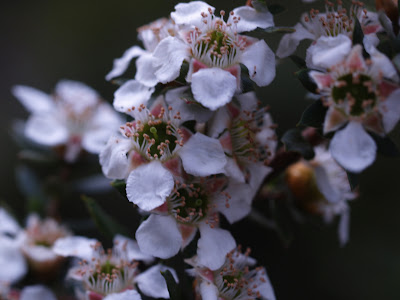 By the way, I am a little late posting. The rain seems to have found a way into our electricial circuits and the house was blacked out last night. No power for my computer. Yes the rain is still falling!