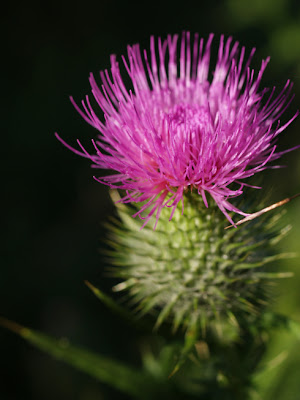 Photo: Thistle (weed, not a native plant)
There were thistles in the weed patch, quite lovely until you try and pull them out. A prickly wild climbing rose was also growing nearby. But I consider the worst of prickly weeds to be blackberry and lantana (they are both noxious weeds). I wrote about them some months ago. The photo of the blackberry was taken that same summer's day when I was doing weeds at Lawson.

Words to walk with:
The Thistle's Grown Aboon the Rose by Allan Cunningham
Full white the Bourbon lily blows,
And fairer haughty England's rose.
Nor shall unsung the symbol smile,
Green Ireland, of thy lovely isle.
In Scotland grows a warlike flower,
Too rough to bloom in lady's bower;
His crest. when high the soldier bears,
And spurs his courser on the spears.
O there it blossoms - there it blows
The thistle's grown aboon the rose.