November 02, 2007
The Norman Lindsay property is quite large and has a short bushwalking track that descends the steps to the now dry pool where men and women once frolicked. It then skirts around the perimeter of the property before turning back towards the etching studio which now houses a pleasant café, the real reason for our visit.

I was delighted so see the first flannel flowers for the season flanking the path. 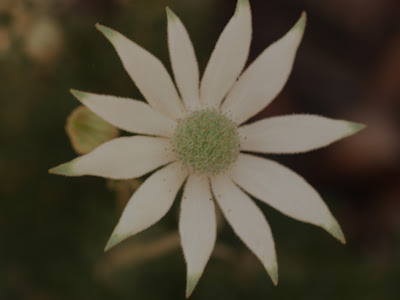 In yet another literary link, Norman Lindsay illustrated the cover of the book While the Billy Boils, written by the famous short story writer and poet Henry Lawson.

Words to walk with:
From In the Dry Season in While the Billy Boils by Henry Lawson
“Draw a wire fence and a few ragged gums, and add some scattered sheep running away from the train. Then you’ll have the bush all along the New South Wales western line from Bathurst on.”