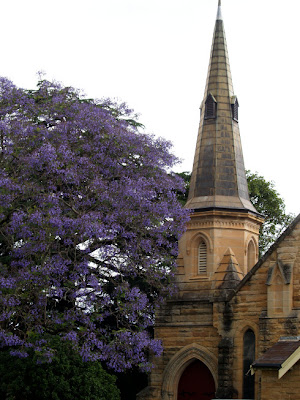 Down in Sydney and in the lower mountains a blue haze of Jacaranda is crowning the houses. In Queensland where I went to school they signaled the time to swot for the year-end exams. If I lived in Lawson I would have surely failed. It will be December before they turn on their display here and as they are a sub-tropical tree don't flower any further up.
Words to walk with:
The Jacaranda by Douglas Stewart
"There is some sweetness not to be seen in air,
Not to be trapped in rain, nor to be found
In earth, that made this sky of blossoms flare
In blue and sparkling daylight out of the ground;
Some struggle of more than earth is in triumph here
In that gesture of joy and fulfilment lifted on high
Where, dancing with pale blue fire, the branches rear
And the dark twigs hold the sky up to the sky.
All things move in time as they move in dream;
Abrupt, symbolic, like mountains seen through a rift,
They tower and vanish. I watched the wavering gleam
As the branches paled in the blue sky’s darkening drift,
And more than a tree before me ebbed and returned.
While I could hold it, before I was dazed and blind,
The jacaranda sprang in the sky and burned
And the flare of it lit in the mind a sky without end."