February 18, 2007
I thought it would be interesting to follow up my Valentine’s Day post with some truly ancient rock graffiti so took the drive down to Glenbrook to visit Red Hands Cave.

According to the signage at the cave, the hand paintings were put there over many years, beginning perhaps as far back as 1,600 years . For at least 14,000 years Aborigines have lived in the Blue Mountains. Families belonging to the Daruk tribe lived in the valley at Glenbrook sheltering in the sandstone caves and collecting food on their daily walk. 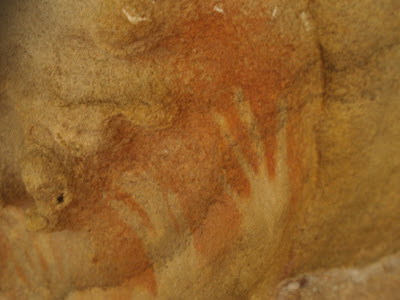 Red Hands Cave, Glenbrook
The hand prints which are in red, orange and white are painted using ochre. Ochre which is found either as coloured clay or rock, was considered one of the Aborigines most prized possessions. The ochre was crushed into a powder using a small grinding stone. Water was then added to make a paste. Animal fat was sometimes mixed with the paste to help fix it to the cave wall – making a long lasting impression.

Words to Walk With:
From Rock Carving by Douglas Stewart
“Shine the torch on the rock: we are not the first
Alone and lost in this world of water and stone.
See, though the maker's life has vanished like a leaf's,
The carvings living a hard, strange life of their own ...”