February 20, 2007
I have not written about animals yet and there is a good reason – I don’t see any. The arrival of European setters certainly reduced their numbers but they do still exist. They are mostly nocturnal and I am not in the habit of tramping about the bush at night. I’m told their presence can be verified in the daytime by looking for their droppings and scratch marks but I’m not going to do that!

The book Fauna of the Blue Mountains by Judy and Peter Smith tells me I could find platypuses, wallabies, wombats, quolls, bandicoots, bats, possums, gliders and native rats. I have seen some bush rats in the garden and possums thump on our roof at night but that is all.

Kangaroos are not prevalent here as they like to graze on grassland and the Mountains are largely blanketed in forest. They can be found in the grassy valleys. Euroka Clearing at Glenbrook is such a spot – apparently this population was reestablished through the release of captive animals. I planned to take photo while I was there. 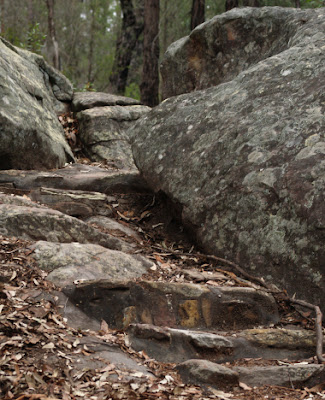 Not a kangaroo
instead the steps to Red Hands Cave, Glenbrook

As we cruised down the hill to Euroka Clearing my anticipation was jarred by a nasty scraping noise under the car – a flat tyre. As neither of us is mechanically inclined and we haven’t had a flat in this car, I frantically scanned the instruction manual to find where the jack was stowed. I was panicking because it was already after 6pm and there were lots of signs warning that the gates (some kilometers away) closed at 7pm. Rescue came – a vehicle from the National Parks and Wildlife service pulled alongside and Tony a helpful man with a good jack gave us a hand to fit the spare. I was so relieved, we escaped out the gate, without a care for kangaroo pictures.

Words to Walk With:
From Katoomba and Leura Tourist Association, 1905
“A pleasant day’s outing can be had by following the Caves track as far as Cox’s River, a distance of about 10 miles from Katoomba, and good shooting is often to be obtained, the game being rabbits*, hares, wallabies and different kinds of birds.”

[*Rabbits and hares are introduced animals. These, together with foxes, feral pigs, dogs and cats have helped to deplete native wildlife. It is generally not legal to kill native fauna today.]