After the banksia flowers fade, hairy seed cones remain on the tree, and can stay there for many years. In some species the seed sacks will open as soon as the seed is mature, but most often they wait for bushfire. Wakened by the fire and smoke the little mouths in the cone open and spit out two small seeds that twirl to the ground on papery wings. The seeds readily germinate in the ash enriched, fire blackened earth. 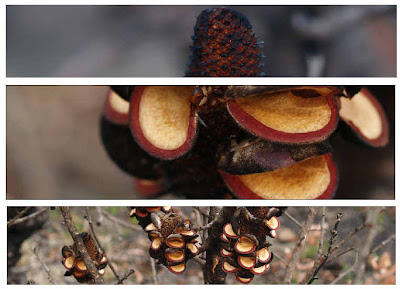 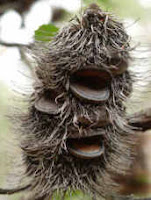 The Tales of Snugglepot and Cuddlepie was the first Australian children’s book to use native plants and animals instead of hedghogs, badgers and bluebells. The cute little gumnut babies were terrorized by the Big Bad Banksia Men … and so were most small children including me.

Hairy cones like this inspired those villainous men. You will find an illustration of a Banksia Man on Wikipedia.