At the end of the day

July 15, 2007
At the end of the day weary commuters return from the noisy city, glad to count down stations to home as black night begins to swallow the day. 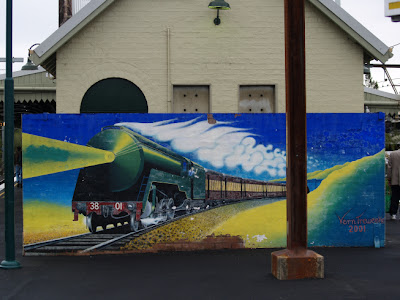 Next week I will show you some more of my favourite murals from around the mountains.

Words to walk with:
The Night Express by William Hurd Hillyer
“There's a light at last in the sable mist, and it hangs like a rising star
On the border-line 'twixt earth and sky, where the rails run straight and far;
And deeply sounds from hill to hill, in mighty monotone,
A distant voice—a hoarse, wild note with savage warning blown.
'Tis the night express, and well 't is named, for behold! from out the night
It comes and darkly adown the rails it looms to the startled sight—
Larger, nearer, nearer yet—till at last there's a clang and roar,
A wave of heat, and a gleam of red from a closing furnace door;
Then the crash and shriek of the rushing train—and our hearts beat fast and high
When sudden and swift through the shadowy mist the night express goes by!”