July 04, 2007
From Reid’s Plateau at the Katoomba end of the Prince Henry Cliff walk (which I did a couple of weeks ago) the Furber Steps lead deep into the valley through rich rainforest.
On this walk I discovered there are more witches in Katoomba than the ones that walk the streets during the Winter Magic festival. Not far down the Furber Steps there is a lovely waterfall called Witches Leap. The name suggests to me a place where fledgling witches practise flying on broomsticks but apparently “leap” is a Scottish dialect word meaning waterfall. 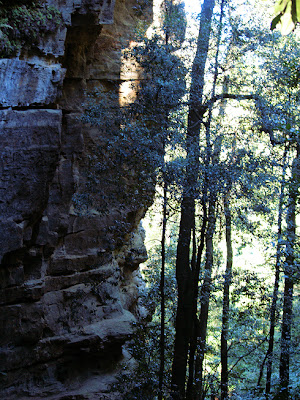 Words to walk with:
This is how the long story of Harry at Hogwarts School of Witchcraft and Wizardry began in Harry Potter and the Philosopher’s Stone.
“Mr and Mrs Dursley, of number four, Privet Drive, were proud to say they were perfectly normal, thank you very much. They were the last people you’d expect to be involved in anything strange or mysterious, because they just didn’t hold with such nonsense.”