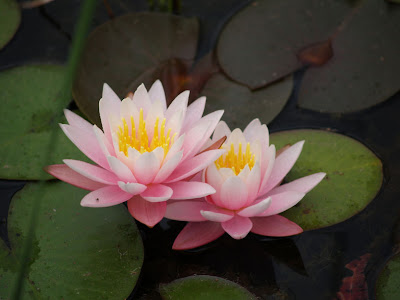 One the highway at Falconbridge there is an unusual pond at the side of the road. Unusual in that it doesn't seem to be water storage for the old steam trains and is filled with water lilies which flower at this time of year. I've often meant to stop and take a photo and did so this weekend.

It is impossible to think of Waterlilies and the Blue Mountains without thinking of Kate Llewellyn's Blue Mountains Journal titled The Waterlily. This journal, which I read soon after arriving here, delighted me as it captures life here so well and many years later inspired me to create this photo journal.

Words to Walk with:
From The Waterlily by Kate Llewellyn.
"When I came to live in the mountains I was determined to be happy. Sparrows were pecking the pale green and white shoots of the tree outside the kitchen as I made the first cup of tea for the day. I looked at them, watching them pull up their feathers and decided to write a journal."