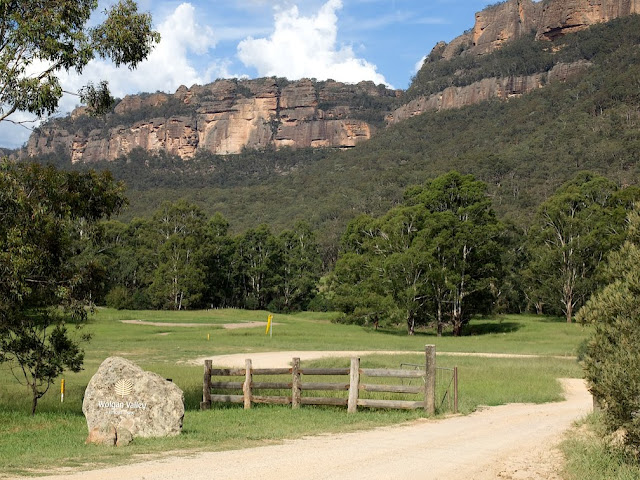 Here it is ... how understated is that! It could be any old farm except for the swish barbed-wire fences running for miles along the "Conservation Reserve" and the wind sock at the front gate.

However you don't even get to peep at the luxury inside unless you are willing to spend $2,000 a night because "To ensure maximum privacy and seclusion, the resort is for exclusive use of our resident guests only. Outside or day visitors are not permitted on the premises."

Never mind, I'll show you my accommodation of choice in the next post.

Words to walk with:
More from The Quality of Sprawl by Les Murray
"Sprawl is really classless, though. It is John Christopher Frederick Murray
asleep in his neighbours' best bed in spurs and oilskins,
but not having thrown up:
sprawl is never Calum, who, in the loud hallway of our house
reinvented the Festoon. Rather
it's Beatrice Miles going twelve hundred ditto in a taxi,
No Lewd Advances, no Hitting Animals, no Speeding,
on the proceeds of her two-bob-a-sonnet Shakespeare readings.
An image of my country. And would thatit were more so.

No, sprawl is full gloss murals on a council-house wall.
Sprawl leans on things. It is loose-limbed in its mind.
Reprimanded and dismissed,
it listens with a grin and one boot up on the rail
of possibility. It may have to leave the Earth.
Being roughly Christian, it scratches the other cheek
And thinks it unlikely. Though people have been shot for sprawl."