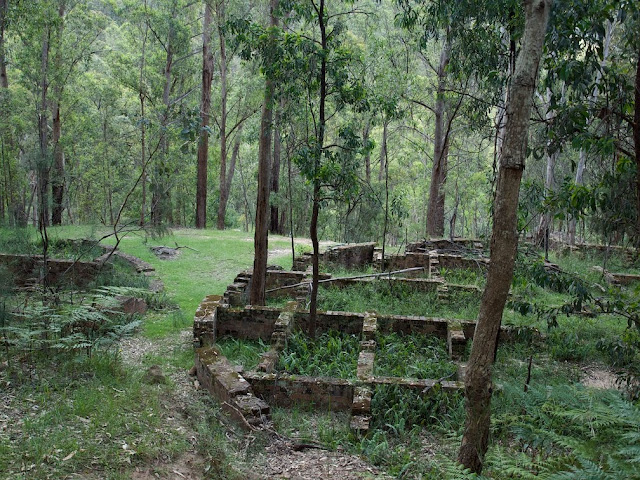 Just up from the Newnes camping area are the ruins of the shale oil refinery. The Newnes refinery was established in 1906 and shut down in the 1930s when the works transferred to Glen Davis on the other side of the mountain. The Glen Davis operation is also now a ruin but on private land. The Newnes ruins are within Wollemi National Park and open to the public.

The forest is reclaiming its place, but there is plenty to see ... more in my next few posts.

Words to walk with:
The Ruin by Walter De La Mare
"When the last colours of the day
Have from their burning ebbed away,
About that ruin, cold and lone,
The cricket shrills from stone to stone;
And scattering o'er its darkened green,
Bands of fairies may be seen,
Clattering like grasshoppers, their feet
Dancing a thistledown dance round it:
While the great gold of the mild moon
Tinges their tiny acorn shoon."