August 13, 2007
Another sign says "Mount York became the symbolic focus of the journey across the mountains. Travellers on the road before 1830 [when the Lockyer's Road route became used] were afforded magnificent views of Hartley Vale to the west; in some instances they found a biblical quality to the promise of the lands before them."

I also love the view to the west. A long driving holiday through the immense flat stretches of sheep and wheat country beckons, especially as the cold winter days begin to turn a little warmer and the sun shines a little brighter. 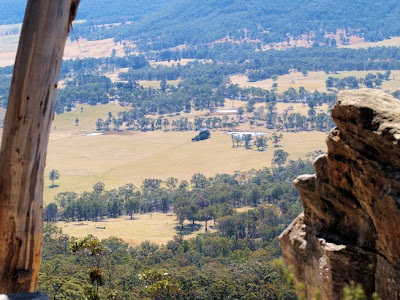 Photo: The land beyond the mountains

Words to walk with:
From The Teams by Henry Lawson
“With eyes half-shut to the blinding dust,
And necks to the yokes bent low,
The beast are pulling as bullocks must;
And the shining tires might almost rust
While the spokes are turning slow.”