After our walk to Fortress Rock we continued the drive to Mount Hay. Earlier in the year I showed some pictures from Mount Hay after the December fires. I had promised myself to go back and see what it looked like some months on. 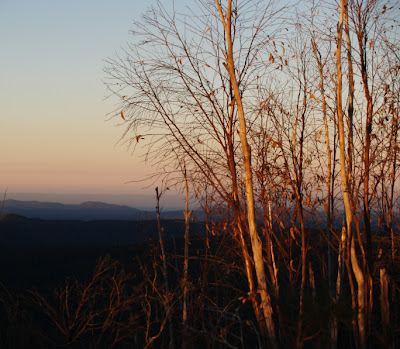 While the ground is green where there was ash in December, there are still plenty of sticks where there were once trees. However, there is also good growth occurring. Click here February 10th to see how it looked soon after the fire and then at the picture below of the same clump of as it appears today.

Words to walk with:
From Fire-Stick Farming by Mark O’Connor a contemporary Australian poet.
"In the hot calm the bees are loud,
working wings and elbows with an angry sound,
as you leap the tussocks, amazed
at your ignorant creation,
the shapes and passions hidden
in a sheet of flame.
And above them all
a new forest rising."