April 18, 2007
This week I did a walk in the lower mountains. The road climbs steeply from Emu Plains at the foot of the mountains up Lapstone Hill.

In the 1860s when the first railway line was built the ascent was too much for the steam trains to take in a single burst and a tunnel was too expensive so a zig-zag (switch back) was constructed. There is an old zig-zag on each side of the mountains.

The Lapstone climb began with an impressive 5 span viaduct across Knapsack Gully. This was originally built for a single railway track and was used until it was bypassed in the early 1890s when Glenbrook Tunnel was built. 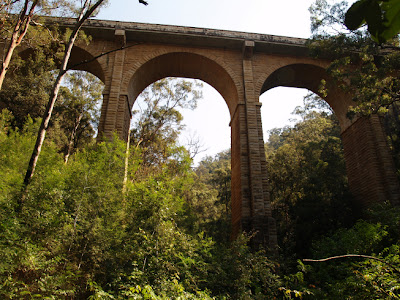 Following that the top was widened to carry 2 lanes of road traffic and was part of the Great Western Highway up the mountains until it was replaced in more recent years by the motorway. Today it is closed to regular vehicular traffic and is used as a walking track. I enjoyed the easy walk on a warm sunny afternoon to view this interesting historic structure. 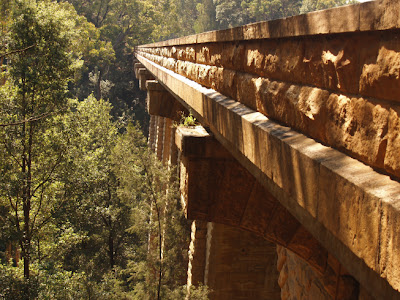 Words to walk with:
Knapsack is not a word much used in Australia, that’s one reason I remember this song from the school choir, also it does have the type of rollicking tune kids love to sing.

From The Happy Wanderer
“I love to go a-wandering,
Along the mountain track,
And as I go, I love to sing,
My knapsack on my back.