April 02, 2007
Darwin’s Walk ends at the top of Wentworth Falls. (I showed the falls in my post of 7 March 2007 and the view from the escarpment on 8 March 2007. Click on the date links for a reminder of how grand the view is from different angles.) Even though I have seen the view many many times I still gasp with wonder when I see it. 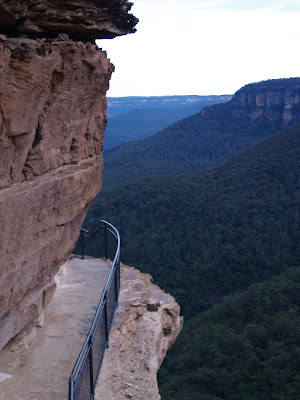 Words to walk with:Charles Darwin describes his experience of seeing this view for the first time in the The Voyage of the Beagle "An immense gulf unexpectedly opens through the trees which border the pathway, at the depth of perhaps 1500 feet. Walking on a few yards, one stands on the brink of a vast precipice, and below one sees a grand bay or gulf, for I know not what other name to give it, thickly covered with forest. The point of view is situated as if at the head of a bay, the line of cliff diverging on each side, and showing headland behind headland, as on a bold sea-coast. These cliffs are composed of horizontal strata of whitish sandstone; and are so absolutely vertical, that in many places a person standing on the edge and throwing down a stone, can see it strike the trees in the abyss below. So unbroken is the line of cliff, that in order to reach the foot of the waterfall, formed by this little stream, it is said to be necessary to go sixteen miles round. About five miles distant in front, another line of cliff extends, which thus appears completely to encircle the valley; and hence the name of bay is justified, as applied to this grand amphitheatrical depression. If we imagine a winding harbour, with its deep water surrounded by bold cliff-like shores, to be laid dry, and a forest to spring up on its sandy bottom, we should then have the appearance and structure here exhibited. This kind of view was to me quite novel, and extremely magnificent." 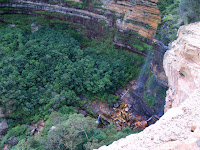