April 22, 2007
My recent walks have been in the Falconbridge-Springwood area. Victory Track starts near the Corridor of Oaks. 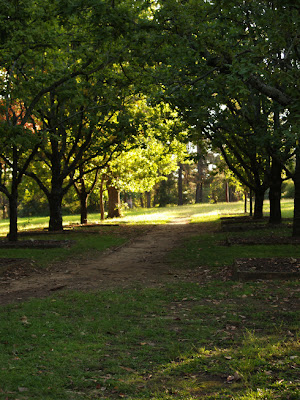 The Prime Minister’s Corridor of Oaks was established as a tribute to Sir Henry Parkes. He was a political leader often called “Father of Federation”. Sir Henry owned property in Falconbridge and his grave is there. The Corridor of Oaks (established by Joseph Jackson a NSW member of parliament) has an oak tree planted by every Australian Prime Minister or their nearest surviving relative.

The federation of Australian colonies occurred on 1 January 1901 with Edmund Barton as the first Prime Minister. 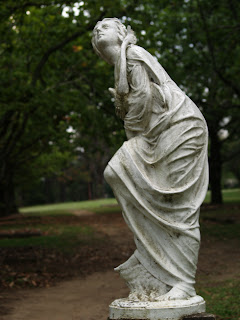 Words to walk with:
From Old Henry Parkes by Dame Mary Gilmore
“Old Henry Parkes,
In his big top hat,
His lion-like head,
Eyes like a sword,
Blazing in a thought,
Blazing at affront,
Blazing for a word --
But, in-drawn, still, and cold as the ice,
as vision-held he sat, and saw
Commonwealth and Empire, brotherly and brother,
This State and that State, all linked together.
For Parkes had a vision,
And the vision came true;
And Pitt Street, Macquarie Street,
Never shall forget
That great old man coming down the way,
Coming into Sydney like a king!”