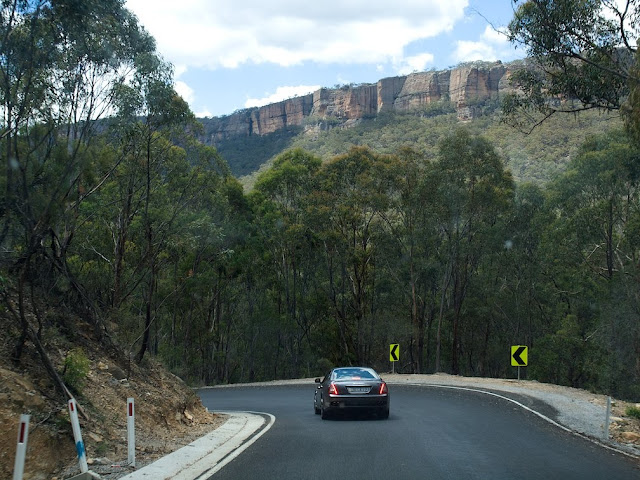 The trail we have been following joins the Wolgan Valley Road. Nice to be back on sealed road for a while.

When we travelled this road in March last year I mentioned that the six star Emirates Wolgan Valley Resort and Spa was due to open in October 2009. This is the first time I've been out there since so I was keen to see if it had made any difference. The first sign of change afoot was the Masurati descending the road in front of us (not the kind of car we usually see on our mountain roads). When we hit the gravel road (even though it is very smooth) I suspect the driver was concerned about his shiney paintwork because he quickly beckoned us to pass him.

By now I was wondering what the entrance to the resort would be like.

Words to walk with:
From The Quality Of Sprawl by Les Murray
"Sprawl is the quality
of the man who cut down his Rolls-Royce
into a farm utility truck, and sprawl
is what the company lacked when it made repeated efforts
to buy the vehicle back and repair its image.

Sprawl is doing your farm work by aeroplane, roughly,
or driving a hitchhiker that extra hundred miles home.
It is the rococo of being your own still centre.
It is never lighting cigars with ten dollar notes:
that's idiot ostentation and murder of starving people.
Nor can it be bought with the ash of million dollar deeds.

Sprawl lengthens the legs; it trains greyhounds on liver and beer.
Sprawl almost never says, Why not?, with palms comically raised
nor can it be dressed for, not even in running shoes worn
with mink and a nose ring. That is Society. That's Style.
Sprawl is more like the thirteenth banana in a dozen
or anyway the fourteenth.