May 05, 2007
On the northern side of Katoomba, the opposite side of the ridge to the famous Three Sisters there is a pleasant walk to Minnehaha Falls. The track follows Yosemite Creek which cuts through an unusually large hanging swamp. The grassy swampland is said to have reminded the early walkers of the meadows in the Yosemite National Park in the USA.
Yosemite Creek chuckles cheerily beside the path, descending a steepening ladder of rocks before leaping over a cliff to fall to a quiet pool far below. This pool was once a very deep swimming hole popular with tourists but a century of development in the area has led to siltation in the creek and the water hole is now a shallow pool. Even so, this is a rewarding trek through a different style of bushland to other walks I have done thus far. 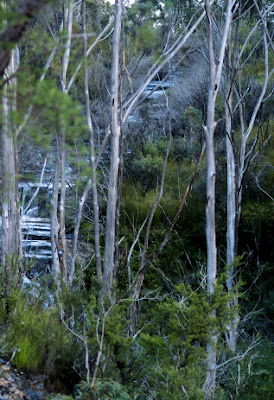 Words to Walk With:
The falls get their name from the poem Song of Hiawatha by Henry Wadsworth Longfellow
"In the land of the Dacotahs,
Where the Falls of Minnehaha
Flash and gleam among the oak-trees,
Laugh and leap into the valley.
There the ancient Arrow-maker
Made his arrow-heads of sandstone,
Arrow-heads of chalcedony,
Arrow-heads of flint and jasper,
Smoothed and sharpened at the edges,
Hard and polished, keen and costly.
With him dwelt his dark-eyed daughter,
Wayward as the Minnehaha,
With her moods of shade and sunshine,
Eyes that smiled and frowned alternate,
Feet as rapid as the river,
Tresses flowing like the water,
And as musical a laughter:
And he named her from the river,
From the water-fall he named her,
Minnehaha, Laughing Water."