May 14, 2007
Prince Henry Cliff walk runs from Katoomba to Leura. At Easter time I did some of this walk starting from Gordon Falls in Leura. This week I decided to follow more of it starting at Echo Point in Katoomba.

Echo Point is the place where the three sisters rock formation is seen. I was amused to discover from a sign at the start of the Cliff Walk that the legend of the three sisters is a non-aboriginal story that started in the 1930s. The aboriginal dream time story had 7 sisters. 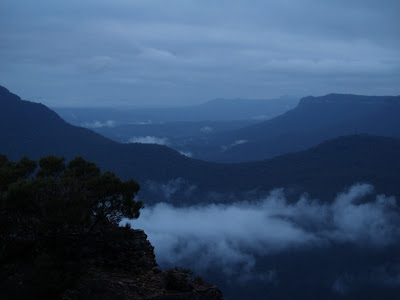 Seven sisters, now that would be a interesting challenge! Yesterday I was thinking of my mother, today I think of my sisters. I was once one of three sisters, now we are two.

Words to walk with:
In the introduction to the book Sisters edited by Drusilla Modjeska she writes of the impact of the loss of a sister
“… brings to us in loss an acute understanding of the complicated, uneven tide of lived feeling that passes between girls who share parents: rivalry and resentment, sensitivity to slights and differences, tears and tantrums, dreams and fantasies, and love as abiding as blood”
Ah yes, there are none better than sisters.